Pisa: the building inspectors are leanient

After Venice, we decided to go to Pisa, but we only wanted to spend one night there. We wanted time to see different things than just the cliche tourist attraction. As it turns out, you really don’t need more than half a day to see Pisa anyway. We arrived around 3 or so and started to walk directly towards the tower, which is almost as far across town as you can get from the station. The town, by the way, did not look very lively. I imagined it would be full of tourist, but not so much as a tumbleweed wandered the streets. After we crossed a river, we began to see more forms of life, which is when we decided we would look for a hotel. After having spent a week playing frisbee on the beach, all I wanted in the world was a bathtub and a laundry machine. Which we eventually found, to my inexpressible joy.
While I could do laundry in the bathtub, I really wanted to find a machine. Our host marked on a tourist map where she thought we could find a self service place, and we headed out. During our laundry machine hunt, we turned a corner and there over and between the buildings peaks the infamous leaning tower of Pisa.

The leaning tower of Pisa is very white, and yes, it is indeed leaning. What I didn’t know though was that the tower is right next to two other buildings. One that looks like a church, and one that Jeff says looks like a boob and now I can’t un-see it either. These three buildings make up the “Piazza Del Duomo” (cathedral square) or also called, the “Piazza Del Miracoli” (square of miracles). The tower itself is about 60m tall and leans about 4 degrees, displacing the top 3m to the side than if it was perfectly vertical. The building began to “lean” when they started constructing the 2nd floor in 1178 (construction began 5 years earlier). The tower is leaning because it only has a 3m foundation on top of already weak soil. Due to Pisa doing battle with Florence, Genoa, and Lucca, construction on the building stopped for about 100 years. This allowed the soil to settle, and prevented the tower from completely toppling over. During World War II the German military used the tower as an observation tower, and the allies entrusted a US Military Sergeant with the decision to fire at the tower or not. Luckily he chose not to attack the building. Engineering to ensure that the tower does not topple over has been going on since 1964 at least, and the tower was closed to the public for 10 years in 1990 in order to fix the foundation.
Also by the tower is the only and greenest grass of all of Pisa, and maybe Italy. Next to the grass are tons of people trying to sell you watches, sunglasses, key chains, tea towels, figurines, lighters, back scratchers and more. So while you are trying to take your stereotypical Pisa photo, they are trying to sell you 10€ sunglasses… “No 10€? Okay, okay, 5€.” 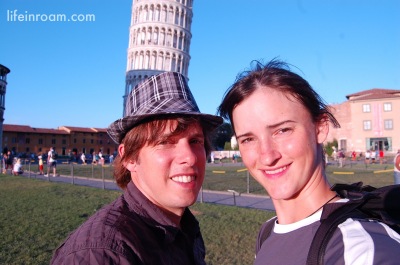 After taking some evening photos of the tower, we continued on our way to the laundry machine. World wonders be damned, I needed clean unmentionables. We circled the area on the map that the host had marked for us, but we didn’t see a self-service laundromat. Jeff was ready to go back and wash our clothes in the tub, but I wanted to walk down one more street, which I’m glad we did because there was the glorious wonder that is a clean-clothes-maker. While I waited with the laundry Jeff went and got us two soups from a Chinese restaurant nearby, and we ate the deliciousness in the atmosphere of our suds-ing clothes. 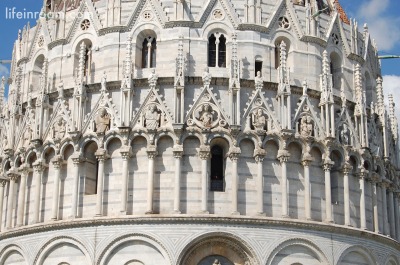 The next day after a nice bath and the clean clothes, I finally felt like I got the last of the sand out of my ears and from between my toes. We went back to the tower to take more photos, but honestly if you don’t pay the 12€ fee to go up or in the buildings, it is a rather dull spot. It isn’t really even a wonder of the world. Well, it is, but the list is huge now, and if you were to remake the top 7 wonders, I doubt it would make the cut. I actually enjoyed the boob building more because it was covered in statues and cravings and I just couldn’t shake the idea that this building was really important. The “boob building” by the way is the Piazza Del Duomo’s Baptistery. 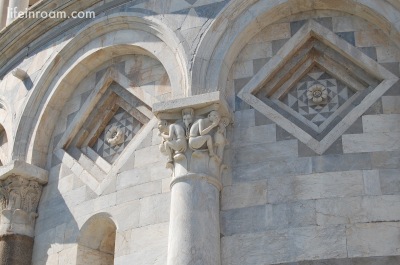 After our photo shoot, Jeff and I used the hotels Internet to plan where to go next. Our decision ended up being a good one, because since we’ve visited, something has happened that will make it never the same again. Stay tuned until next time though.
Advertisement