After Cinque Terre, Jeff and I took a long train ride to Naples and we arrived around dusk. Jeff and I usually travel without hotel reservations because Jeff likes to be flexible and he also thinks that the prices are cheaper than if you prebook. We walked towards what we heard was the city center and tried to stop by every hotel we saw, which admittedly wasn’t very many. I began to get nervous, but we eventually found a hotel with two beds available. The room was purple, and had two twin beds along the wall, so we slept head to head, and felt like teenage girls. Or at least I did. The hotels in Europe are definitely different than the ones in America.

That night we explored the city with some gelato and walked along the water. The walk reminded me a lot of San Francisco or the Bay area, because across the water you could see a crowd of orange lights dotting the horizon. The sort of orange from industrial areas, not the same hue that the lights from houses have. My camera doesn’t have a flash that works, so I never take it out at night, though with a tripod, I’m sure the skyline would of been nice.
Naples is one of the biggest cities in Italy, and one of the longest inhabited cities in the world with an existence of 2,800 years. Jeff finally felt like real Italians lived here, and that it wasn’t a tourist hot-spot. I personally hated the city, as I constantly felt unsafe, thinking anyone within 1 meter was picking my pocket.  The roads are absolutely terrible to walk down. Traffic is 3 lanes wides with speeding cars everywhere, and even small alleys are a pedestrian nightmare because cars will zoom down them with only 15 centimeters of space on either side. Scooters are even more reckless as they carry whole families on one moped, and I swear they try to play a game of chicken with you, and by chicken, I mean they make you duck into stores to get out of the way.
In 1282 the city was the capital of the Kingdom of Naples. In 1816 it joined with Sicily and became the capital of Two Sicilies, and finally in 1861 Italy was unified in the manner that it is known today. The population of the city is similar to that of San Jose, CA (957, 465) and has a population density larger than any city in the USA except New York (21,276/ sq mi).
The economy of Naples is mostly tourist driven, and the majority of the population works in public services. There are a few businesses in Naples, but most of them small, only 7 companies have more than 500 employees. The government of Naples (and honestly, of Italy) is known to be corrupt, and the area has a thriving black market. Sorry to disappoint my readers, but I have no first hand stories about this, though I know it would of been a good blog post. 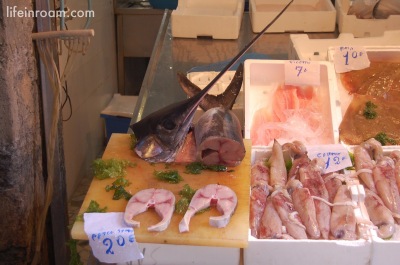 We actually spent most of our time in Naples in a small town just outside the city, that deserves it’s own post. One morning we did go for a long walk en route to the train station and we did come across a few interesting things. My favorite was the fish stall that had a living and breathing octopus in about 5 centimeters of water, and then the head of a sword fish as well. It was honestly very aesthetic, but I did want to liberate the octopus. Also on our walk we saw several interesting sites, including a coke can through a window, and a poster for a local design school.

One thing I like about Italy is its romance friendly environment (I’m purposely being cryptic in this paragraph, so bear with me). There are pieces of art on the street that would cause an uproar in other places. They promote a very positive atmosphere, which I think is one of the fundamental issues in America. They are all over as well, in a family restaurant or outside of a spice shop. Perhaps it is derived from the Roman history, which I’ve heard and casually observed, has a masculinity friendly art and architecture scene. I guess what I really mean is that I think abstinence only education is the snowball that causes a small avalanche of other issues, and Italian culture seems to be more open minded. 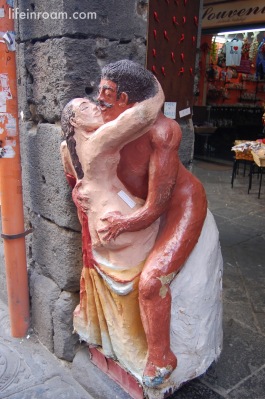 The history of food for Naples is very interesting, or at least, its claims are. Naples states that it is the founding place of pizza, which was a food for the poor and was brought to the upper class by Ferdinad IV. A margherita pizza is named after Queen Margherita, and similar to Germany and it’s beer, there were quality standards required of pizza, (which yeast and flour could be used, etc) until 2004.  Spaghetti is also said to of been created here. Gelato is very popular, but Naples is not it’s origin. The espresso machine that we all know today is said to of been inspired by the way that people of Naples brewed their coffee, apparently they used to use a device called the Neapolitan Flip Coffee Pot.

Naples was definitely my least favorite city of Italy, but I think with more research I would know where to go and what to see. Undoubtedly Naples has a rich culture, and interesting history. I just recommend knowing it before you go, and having a schedule, because Naples was an uncomfortable city to just walk around and explore hoping to find something interesting. In my opinion anyway, I know people will disagree.
Advertisement