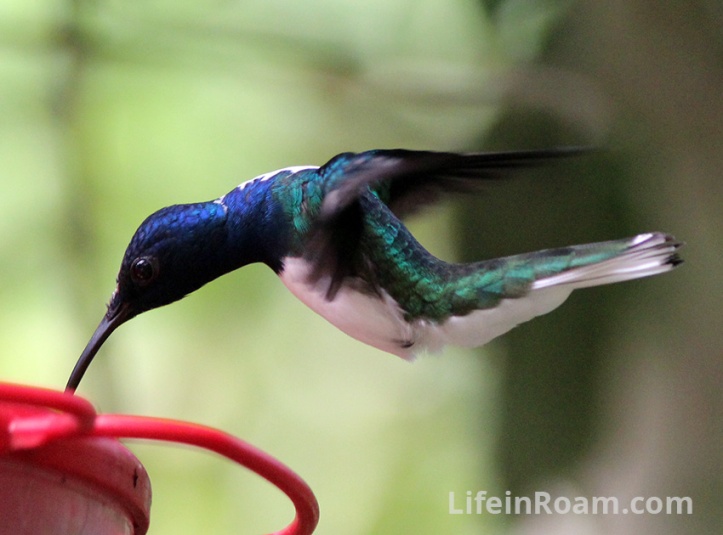 One of the top rated things to do in Ecuador, according to Lonely Planet 2016, is bird watching in Mindo. Not wanting to miss out, we signed up. It was $60 for the three of us, after that it would have been an extra $20/person. We had to be at the bird watching shop at 6am to meet our tour guide, Fernando.

Mindo is especially good for bird watching because it is between Andean and coastal regions, at a mid-elevation. Making it a good midway points for these different kinds of temperate species birds to meet during migratory travels. In the immediate Mindo area there can be up to 400 different bird species, and more species are visible up to a day trip away from Mindo.

At first, I was skeptical it was going to be worth the $60. Fernando started the tour by walking along the same road that we used ourselves to walk to the waterfalls in Mindo. This road is the main access point to all the outdoor / nature activities in Mindo.  I was expecting some secret only-bird-watchers-know locations.

After about 30 minutes though, I was proved wrong. It was an excellent tour. It would probably have been better if we knew what kind of birds we were looking for, but Fernando did a good job of pointing out interesting birds for us Gringos. We requested to see toucans, which he was easily able to do. At the end of the trip he was saying that there were “toucans like pigeons” that day. Definitely do some research before your tour and make requests of what specific birds you would like to see.

Another thing that Fernando did that was much appreciated was he was able to take photos with my smart phone through his telescope. So even though our telephoto lens was  not good enough for all of the birds we saw, we got some nice photos.

In addition to the toucans, Fernando helped us spot some different species of birds as well.

Such as the Rufous Motmot. This bird burrows into the side of banks, which as we were walking up the road to the waterfalls, we noticed one or two along the side. They are the second largest of motmots, which are the family of birds that include Kingfishers and Bee-eaters. They are usually very brightly colored, and other breeds have sapphire coloring. Despite being brilliant colored, there is not a lot known about Motmots still.

Flycatchers are an incredible broad term for birds, as there are more than 400 distinct species in the “Tyrant Flycatcher” family alone. Despite being extremely common, I still think they are extremely cute.

Along with the toucans there were typically Red Billed Parrots who were very cute and affectionate with each other. 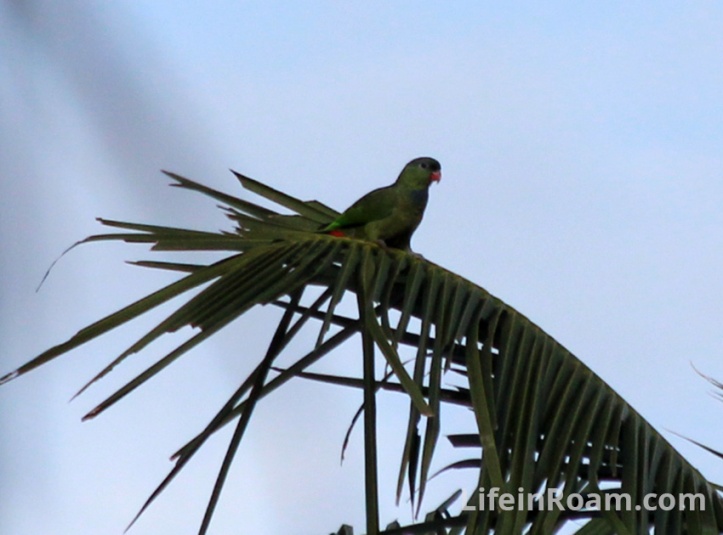 After spending hours bird-watching, which was entertaining the whole time, Jeff proclaimed “Look, there is something in the trees with the toucans.” He thought it was a Turkey, but we wholly dismissed him as being wrong, because what would a turkey be doing in a tree.

Turns out it was a turkey in a tree though. Turns out wild turkeys roost in trees at night.

If you don’t want to spend money on a bird watching tour, or if you just really like hummingbirds, there are plenty of spots to check them out. We found these White Necked Jacobins and more outside of the butterfly farm. Some other travelers also told us that for a taxi ride, you can go to Sachatamia Lodge for some excellent hummingbird (and other bird) observation. I don’t remember if the lodge charged them for hanging out and observing birds.

Also, if you are a bird watcher you probably don’t need the tour. For us amateurs, having Fernando’s eye was incredibly helpful. Also his equipment allowed us to view the birds more closely, which we wouldn’t have had on our own.