All photos in this post were taken by Alejandro Cynowicz. More of his photography can be found here.

After spending a month in South America and hiking around Patagonia for 3 weeks we took a flight from El Chalten to Buenos Aires, so we could get on an overnight bus back south, to play a three-day hat tournament on the beach. It was a lot of travel.

This would be our second time playing ultimate in South America, the first being pickup in Quito, Ecuador. It would also be the first big immersion into Spanish-speaking. Until this point, we were either: 1) just with each other or 2) we were in a big touristy place, where English was the common language.

Turns out, my Spanish was terrible.

We found out about the frisbee in Argentina from posting on the Ultimate in Buenos Aires Facebook group. We were quickly scooped up and given details by an American expat named Jamie. She told us about Ultimate Carnaval Hat Tournament and we signed up. Spoiler alert, the tournament has nothing to do with Carnaval in reality.

We were spilt up into teams by the tournament directors literally pulling names out of a hat. I have never been to a tournament where they actually did this. That is where the term “hat” tournament came from, but usually it’s done beforehand to save time. Taylor and Jeff were randomly assigned to the same team. I was on my own and had to make friends.

Overall the tournament was pretty good and the teams were well matched. Luckily, my proficiency at throwing 175 grams of plastic was able to make up for the fact I knew about three words of Spanish.

It’s incredible how being good at catching and throwing plastic has gained us access to social groups around the world.

On the second day of games, the skies were a moody grey. During the second game, they let out a torrential downpour that caused players to run inside and take cover. The overflow from the town drained onto the beach and caused a gushing river to take out one of the end zones. By the time the rain stopped there was a foot deep trench dug out from the water flow.

The silver-lining of a day with shortened and canceled games is that you are less tired for the party. The cost of the tournament included dinner one night, which was really delicious. We danced till 2am in the clubhouse, well, others danced. I wandered around chatting with people to expertly avoid the dance floor. Then we went to a club for another hour or so and there I was unable to avoid the peer pressure to dance. No me gusto a bailar.

The next day, sleepy from staying up late, was the day of semis and the finals. My team won our semi and thus made it to the finals.

I played well all weekend until the finals, during which my cursed backhand came back to haunt me. I have been playing Ultimate since the fall of 2005, and in 2013 I suddenly lost my backhand. I was able to find it again, but every now and then I lose it. Usually if I haven’t been playing for while, or if there is a lot of “pressure” on a game. Or if I have one bad throw. When it happens, my forearm feels stiff and locked. It’s totally a mental problem, but it has really plagued me. When it starts to happen, I play more timidly, which for my team this weekend was a big problem. I was a mover and dealer in the offense and suddenly I was stagnant and afraid to get the disc.

Luckily my team was able to seal the deal without me, and we won. Man was I embarrassed though. Of course the game that everyone was watching would be the one that I completely lose my cool and look like an amateur. 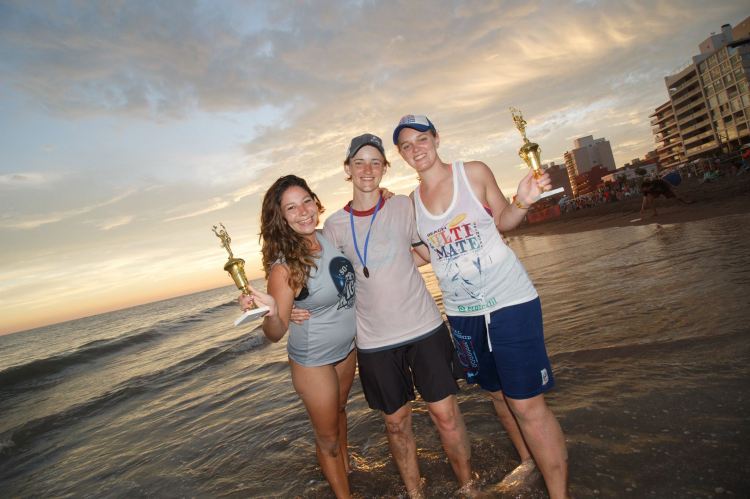 Overall it was a great weekend and a really nice intro into Argentinian Ultimate. We saw a lot of the same people 6 weeks later when we went to a tournament called Sudaka. Argentinian ultimate I believe is fairly new, but there is a lot of skill in the community. I think mostly what is missing now is strategy and teamwork. They can still rely heavily on pure athleticism and excellent throws, but if these key players are stunted, the team suffers. More on that later though when I write about Sudaka.

I'm a Graphic Designer in Seattle, WA looking to expand my portfolio and my knowledge of design. View more posts